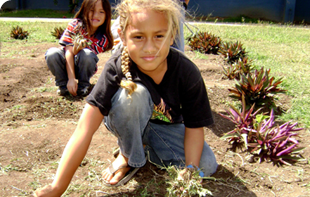 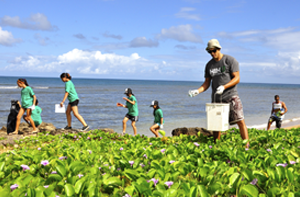 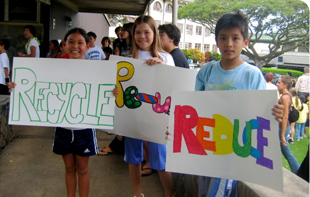 Raised in California, Kim spent her childhood playing on the beaches and exploring the mountains. She attended UC Santa Barbara where she double majored in Art and Mathematics, received her Masters in Education and teaching credential in secondary math education...and met her future husband, Jack Johnson. In 2003, Kim and Jack hosted the first Kōkua Festival and founded the Kōkua Hawaiʻi Foundation. Kim served as the Executive Director for the first 12 years, helping to develop and oversee KHF’s main programs, and transitioned to President of the Board in 2015. Since KHF acquired the new property in 2019, Kim has stepped back in to create the vision and oversee the strategic planning as Kōkua embarks on this new journey. Kim enjoys being in the field as an environmental educator assisting with lessons, cleanups and workdays, which allows her to guide KHF's programs and development from a multifaceted perspective.

Kaliko was raised in Kailua, Oʻahu, where she developed a deep love of the ocean and being outdoors. She is a graduate of the Kamehameha Schools and Occidental College and a product of Hawaiʻi’s public and private school systems. Her work with the ʻĀINA In Schools program has allowed Kaliko to contribute to two of the things she feels most passionately about: the health of Hawaiʻi’s people and its natural environment. Kaliko is a mother of three young children and enjoys spending time with her family, surfing, and supporting her wellness coaching clients.

Liz was hired in 2021 as Kōkua Hawaiʻi Foundation’s first Chief Operating Officer. She is tasked with aligning people, processes, place, and programs to advance KHF’s long-standing non-profit mission, and the vision for its new home, eight acres of 'āina housing a community hub, learning farm, production farm, staff office, and network of sustainable social enterprises. Liz has worked in non-profit management, social innovation, and social justice for 15 years, including as the Executive Director at Molokai Child Abuse Prevention Pathways and a Program Manager at Kupu. Before returning home in 2015, she worked in progressive advocacy for ten years in Washington, DC, where she also performed as a modern dancer, trained as a community organizer, and became part of the global sangha of socially engaged Buddhists. Born and raised in central Oʻahu, she is a Hawaiʻi public school graduate and holds a BA from Washington University in St. Louis and an MBA from Quantic School of Business and Technology. She sits on the Board of the Hawaiʻi Alliance of Nonprofit Organizations and the Grantmaking Committee of the Hawaiʻi People's Fund. In her free time, she enjoys yoga, playing with her dog, building beloved community, and venturing into wild places, especially in her new home moku of Waialua. In the effort to be an ally and accomplice to the indigenous people of Hawaiʻi, Liz is in a daily practice of learning, unlearning, stepping up, stepping back, and cultivating complex forms of kinship, care, and responsibility.

Natalie was raised on the North Shore of Oʻahu. She has worked in the non-profit sector for the majority of her professional career, with an emphasis in environmental education and curriculum development. Natalie loves home-grown mountain apples and enjoys ocean sports of all kinds.

Kelly Perry is a life time North Shore resident. After graduating from the University of Hawaiʻi with a Liberal Studies degree with an emphasis on environmental science, Kelly began her career as an Environmental Educator at the Hawaii Nature Center, this sparked Kelly’s love of nature and the importance of connecting children to the environment, and where her respect of volunteerism was sparked working alongside dedicated docents. A decade later, Kelly continued her non-profit environmental work closer to home, as the Volunteer Manager at the Waimea Valley Audubon Center, where she experienced the power of a concerned and involved community in caring for our natural resources. Kelly has a Certificate of Volunteer Management.

Jaclyn was born and raised on the North Shore of Oʻahu. She attended the University of California at Santa Barbara where she received a degree in Environmental Studies with an emphasis in Sustainable Food Systems and Minored in Education. She previously worked for Heal the Ocean, Explore Ecology and Bureo. Jaclyn enjoys reading, cooking, surfing and gardening!

Rachel grew up on a small farm in Lancaster, Pennsylvania where she developed a great love and appreciation for nature. She attended the United States Naval Academy in Annapolis, Maryland and graduated with her BS in Political Science and minor in Spanish. As her first assignment in the Navy, Rachel did a cultural exchange with the Chilean Navy and sailed around Latin America for four months. During this time, she achieved fluency in Spanish and also taught English to Chilean sailors. Rachel then moved to Oahu to work as an officer for the US Navy. On the weekends, she got involved with the local community by volunteering at various non-profit organizations across the island, including Kōkua Hawaiʻi Foundation. After learning more and experiencing the positive impact that environmentally-minded non-profits have on the ʻāina and its people, Rachel was inspired to make a career change and focus her energy on helping organizations like this. In her free time, Rachel enjoys playing her ukulele, singing, yoga, reading, hiking, snorkeling, photography, edible gardening, birdwatching, and spending time with her husband.

Sarah is a Family Nurse Practitioner with a Masters in Nursing from UH Mānoa. She also has a B.S. in Psychology from Tufts University and a Masters in Education from Carthage College. Sarah brings with her a wealth of experience in non-profit management and curriculum development, previously serving as the Executive Director of Growing Great, a Los Angeles-based school garden and nutrition education non-profit. She also works as a Nurse Practitioner at Kalihi Palama Health Center. Sarah is passionate about promoting health and wellness through nutrition and primary care. She loves spending time with her two sons and husband and going for runs in the mountains or on the beach.

Alex was born and raised in Chicago where she attended the University of Illinois - Chicago and graduated with a BA in Urban Studies. While in college Alex worked with a variety of organizations and companies with a focus on urban farming and garden education and was inspired by the resiliency of strong communities. Alex worked previously as a AmeriCorps VISTA for HACBED and as the Education Coordinator for Keiki and Plow. Alex currently also works with Chef Hui and is always looking for opportunities to learn more and grow within her field.

Summer is from Waipahu, Oʻahu. She is driven by her kuleana to mālama ʻāina—to care for, protect, and ensure the continuity of all that nourishes and sustains life. Summer is an educator at heart and aims to encourage all children of Hawaiʻi to cultivate deep kinship with their natural environment and community. She has a PhD in education at UH Mānoa with a focus on ʻāina-based pedagogies. She loves surfing, paddling, growing food, and spending time with her ʻohana.

Joe graduated with a degree in biology from Tufts University and was inspired to garden by the diversity ways plants have adapted to the world around us. After working in a few kitchens he smashed his love for food and interest in botany together as he evolved into a school garden and nutrition educator. In the future, Joe plans to help remember food traditions by sharing them with students and further his education in time-tested farming practices. In his spare time Joe enjoys hiking, trying new recipes, climbing trees, and napping outside.

Lisa has been a licensed teacher in Hawai`i for over 20 years, supporting both public and private sectors, as well as non-profit organizations. She also helped pilot the Navigating Change Program with NOAA and PVS, the Waialua Kilohana Program with Kamehameha Schools, and was a member of the Hawai`i Environmental Education Alliance (HEEA) Leadership Team in 2015 that developed the Hawai`i Environmental Literacy Plan. She has also been the recipient of the State of Hawai`i Keeping Hawai`i Green award as well as the National Disney Magazine Award for Community Service.

Daniel was born and raised in Haleʻiwa! He is passionate about farming, restoring native Hawaiian plants and taking care of the ʻāina.

Mahalo to our Kōkua Hawaiʻi Foundation staff who worked with us in the past! 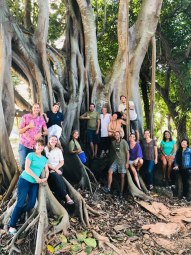 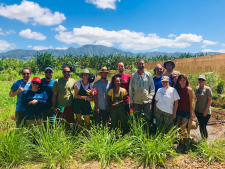 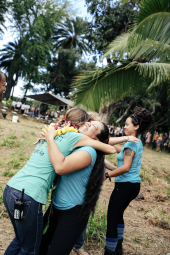 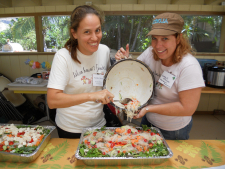 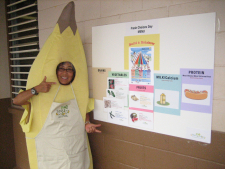 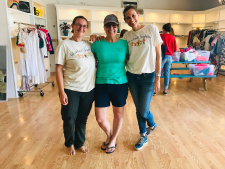 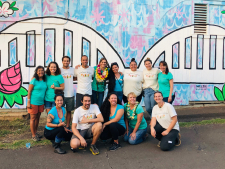 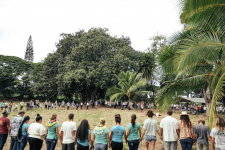 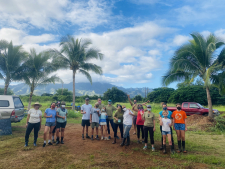 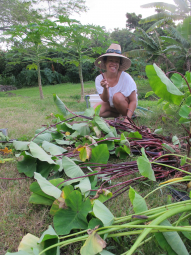