“Even recycling one bottle cap can make a difference.” 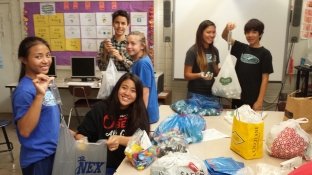 I won’t lie – I’ve been thinking a lot about bottle caps for almost 2 months now.

As Student Activities Coordinator for Niu Valley Middle School, I oversee our participation in many activities and events and I want to make sure that school community is well represented, our students learn something from being involved and it’s a pleasant experience for everyone.  When the Bottle Cap Challenge started, I made announcements, shared facts about recycling, and spent time reminding our students about the importance of taking care of our island. We should participate because it was the right thing to do, not because we might win a prize. The students responded – slowly at first, and I began to worry that our effort would be small and embarrassing.

As the days passed, I continued to remind students about the Challenge, putting announcements in the Parent Newsletter, speaking on our School News Broadcast. Bottle Caps trickled in – 5 from a 6th grader, 10 from a group of girls, another 7 from a pair of friends.  It was really beginning to bother me that our school wasn’t responding.
Then I thought of the story of the starfish. You know the one about the thousands of starfish on the beach and a person who was putting starfish back into the ocean. The person told another on the beach, “The sun is up and the tide is going out. If I don’t throw them in, they’ll die.

Today (April 1, 2014) I delivered 17 large bags of bottle caps to the recycling center – approximately 275 pounds of bottle caps. Will it win a prize? Who knows? The important thing is our students saw the impact of their efforts and the difference it made in our community. My favorite moment of the last two months was when a student came into my office and said, “I just have one bottle cap from my water that I’m drinking. It isn’t much, but I want to add it to the pile.” I asked him why he didn’t throw it away. “Even recycling one bottle cap can make a difference.”

The Bottle Cap Challenge has reminded me that there are people who want to do the right thing. People want to Malama the Aina and they want to support schools but often don’t know how to participate – sometimes because they don’t know what to do and sometimes because the “system to participate” doesn’t exist. I can’t tell you how many people, both students and community members, said to me that they save bottle caps because they know it’s not right to throw them away – there must be a way to recycle them. Many of the bags of bottle caps that came to my office were old and deteriorating, filled with dried leaves and dirt. Other bags came to me with notes from families who shared how they spent time as a family sorting the different bottle caps to educate their children on the importance of taking care of our island. 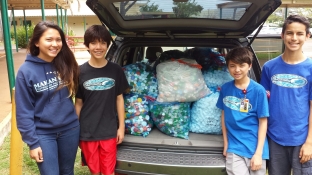 I hope that recycling opportunities continue to expand in Hawaii. People will respond, people want to protect and preserve our beautiful islands. Mahalo to Kokua Hawaii Foundation for opportunities like this Challenge so we can do the right thing and make a difference.