Most people wouldn't choose to spend their Martin Luther King Jr. Day sweltering in the hot Kahuku sun, but that didn't stop the Ewa Makai tigers! Our Leadership team sprung up bright and early and took on the beach clean up sponsored by the Kokua Hawaii Foundation, (KHF) and Sustainable Coastlines Hawaii at the James Campbell Wildlife Refuge in Kahuku. Our day began at Ewa Makai Middle School where we piled into the Ching Bus, (AKA my teacher's SUV) and began our long trek to the North Shore of Oahu. Fortunately some supportive parents like the Bonilla and the Flores 'ohana helped join our caravan. The ride was quite a journey but beautiful and entertaining as we Snapchatted boasting photos to show that our car was having the most fun. Once the H-2 freeway ended we were treated to beautiful views of green fields filled with pineapples for as far as the eye could see. Hale'iwa greeted us with the most breathtaking views of the Pacific Ocean and adorable fruit kiosks and quirky shops.  We slowed down to point at the infamous Hale'iwa sign with the surfer on it, and then became entranced by the oversized  windmills decorating the hillside. My co-pilot was placated by some incredibly perfect waves along the way.  A little blue sign posted by Sustainable Coastlines Hawaii helped us pin point where our next adventure would begin.

We had to do a little Indiana Jones off-road action to get to the Wildlife Refuge. The unpaved road was long, bumpy and grassy and we felt like we were on a safari. It kinda smelled like fresh rain on wet grass as a butterfly lost its way in our car for a bit. After surviving some natural speed bumps, divots and dust bowls, we finally made it to the Refuge with a panoramic view of the seashore.  We were welcomed with big hugs and high-fives by KHF Program Director, Natalie McKinney and co-founder of KHF, Kim Johnson. We gathered our necessary tools for the task at hand and picked up the supplied buckets and huge recycled burlap bags that were once used to store horse feed or rice. We used the burlap and buckets to gather our trash and debris and were also supplied with some reusable gloves-similar to the ones we use in the garden.  As I slid the loose canvas gloves over my hands I wondered how many hands these bad boys had protected and how many pounds of trash they encountered. Some of our team members started to collect rubbish that were tangled in the Naupaka plants while other team members collected rubbish along the rocks and sand. Together with my teacher Mrs. Ching, I began picking up plastic and debris along the Naupaka plants which extended all the way down the beach. I figured that's where our endemic birds would most likely forage for food and accidentally mistake the plastic bits for a bug. I was amazed at how much trash we collected in and around the Naupaka plants!  There was an abundance of rubbish and plastic tangled in the leaves and roots. Every time we spotted some plastic or trash it felt like finding buried treasure! Some of the plastic and rubbish we collected were as tiny as an eraser on a pencil while others were much larger like buoys. I realized how easily birds or marine animals could mistake these items for food, which if ingested could make them sick, injure or kill them. Ultimately, we collected a total of 1,000 pounds of rubbish, plastic and debris.  350 pounds of that load was deemed recyclable and sent to Method Home for their Ocean Plastic Project in which they would turn it into something reusable.  Interestingly, we estimated that about 95% of the trash we collected did not originate in Hawaii but were washed ashore from other places in the world such as Asia.

After walking up and down the shores of Kahuku several times we were finally able to call it a day. We felt accomplished as we admired how polished the beach looked and how our efforts had made an impact on this beautiful stretch of land. Not only did the beach and wildlife refuge look clean but it was now a much safer environment for the wildlife that lived there! We were rewarded and refreshed with cold water that we refilled our reusable water bottles with and fresh bananas and trail mix as we made our way back to the refuge. The lot was filled with a row of little huddles of busy experts and volunteers gathered around tarps filled with heaps of trash and plastic. These volunteers sorted through the debris separating, glass, natural debris and plastic like it wasn't their first rodeo! The founders of Bureo skateboards, David Stover and Kevin Ahearn, thanked us for our help and shared how they recycle for a living and create cool skateboard decks out of the fishnets that the fisherman find discarded along the Chilean coasts. I thought it was awesome that they were able to find such an innovative and thoughtful way to support the Chilean economy by collecting cleaning and reusing old fishnets that would have otherwise filled up our landfills and strangled our marine life.

As if this rewarding day at this secluded refuge couldn't get any better, we were star struck upon seeing Eleven time World Surfing Champ Kelly Slater, and local singer, songwriter, celebrity and philanthropist Kokua Hawaii co-founder, Jack Johnson who showed their kokua by picking up opala and sorting the trash to recycle at Method Home. Both were gracious and patient allowing us to take multiple group shots with them. Jack taught us to only recycle the Hi-5's and send the plastic parts that are hard and not pliable or transparent to Method Home. These celebrities spent many hours picking up opala and thanking others for taking care of the shores and oceans of Hawaii Nei. They took the time to talk to us about how important it was to preserve out beautiful island through reducing, reusing and recycling and ultimately about our pledges to be PLASTIC FREE!  It was a great feeling to know that our efforts made such a huge difference and it inspired me to think of what else we could do to preserve our beautiful island. 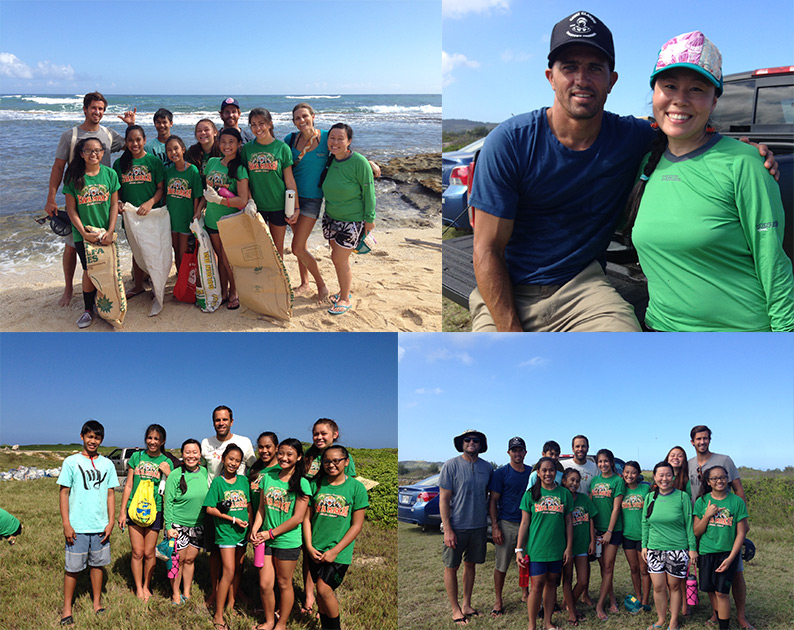